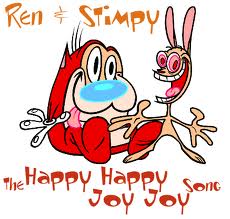 Anyone who ever watched the cartoon show Ren and Stimpy on MTV will remember this funny song that they used to dance to. Well, based on a scale of 1 to 5, with five being the best ranking, below is a list of the ten happiest census metropolitan areas (CMA) in Canada. The rankings were first published in November 2010 in a report entitled, Does Money Matter? Determining the Happiness of Canadians, by the Centre for the Study of Living Standards (CSLS) in Ottawa.

The report made the following two important conclusions:

“We find that household income is a relatively weak determinant of individual happiness. Perceived mental and physical health status as well as stress levels and sense of belonging are better predictors of happiness.”

“We find that the most important reason for geographical variations in happiness in Canada is differences in the sense of belonging to local communities, which is generally higher in small CMAs, rural areas, and Atlantic Canada.”

It is also interesting to note, that the national average for Canada was 4.24 and even the lowest ranked metropolitan area still was ranked at 4.15, which in my mind is still an excellent score out of a maximum of five.

While the old adage “money cannot buy” happiness is familiar to all of us, this comprehensive study lends credence to that adage. The entire report may be viewed via this weblink.

This entry was posted in Canada, Cities, Uncategorized and tagged Canada, cities, happiness. Bookmark the permalink.