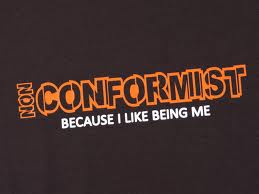 I don’t know about you, but personally, I have had quite enough with many of the mass-market’s rigid conformity requirements.  Do this – do that, wear this – wear that, believe this – believe that, watch this – watch that, is often just a bunch of overbearing mind control by those who want your hard-earned dollars or your support.

Perhaps these feelings come from those faint echos reverberating in my head, of the era I grew up. But, I find the whole idea of being a mindless drone controlled by Madison Avenue, Wall Street tycoons, nearly identical major political parties, and certain forms religious dogma annoying at best and scary at worst. I greatly admire and respect those who have found subtle (and sometimes overt) ways to fend-off the trappings of rampant capitalism, whether it be a tattoo, a song, a poem, a hairstyle or hair color, a book, or an overall lifestyle.

Myself, I let my hair grow longer (where it will still grow) than most men my age; enjoy new, alternative, and experimental music over “classic rock”; fully intend to get my first tattoo in the near future; reject many tenets of both major political parties; strongly question religious dogmas written by humans, but held over the head of others as perfect; was an environmentalist before it was cool; was a bike commuting advocate way before it became popularized; and tend to reject “brand” names and loyalty, with the notably exception of Apple and a few others.

So, how does one begin rejecting the mass-market’s hypnotic powers? Here are a few thoughts – certainly not a complete list, but a start.

First – Be realistic. Without moving to the Yukon wilderness or the Sahara, none of us can fully escape the mass-market. That’s reality, but that does not mean we have to adhere to every principle and tenet.

Second – Think for yourself and follow your heart. Do not let the equivalent of mass-market peer pressure “steer” you in one direction or another. “Steers” get castrated and end up in the slaughterhouse, so you don’t want to be too directed by others, including me. Also, screw the pundits. If they know so much, then why are they just pundits?

Third – Accept that there are some aspects of the mass-market that you may enjoy and revel in them. This does not make you a conformist, it means you have consciously made a decision to accept or enjoy these.

Fourth – Start with the easiest. Think about what your favorite activities are and begin your search there. You are likely to know more resources for activities you enjoy, which should make this part easier. I personally love listening to alternative rock music, so as I began attending more events and read more about the local music scene, I learned about similar and tangential activities that have now become among my favorite pastimes.

Fifth – Look for other alternatives to the norm that may interest you. They are all round us, but do not get the press or notoriety of those anointed by Madison Avenue or the mass media. This is probably easier to accomplish in a larger city or college town. Avant garde music and art should be the easiest to locate. With some effort and persistence, non-conformist opportunities abound, whether they be a food co-op for groceries, a tattoo parlor for body art, a non-creedal religion, books, movies, and on and on.

Sixth – Move outside your comfort zone. Make yourself attend activities, events, groups, and organizations that are outside the norm. You will find new interests, make new friends, and learn a lot about yourself in the meantime.

Seven – Enjoy the adventure and keep searching. Life is meant to be lived to its fullest. Once you have found those things strongly believe in or you really like, enjoy immersing yourself. But, it is important to never stop searching for new concepts, better ideas, and other ways of doing things. Even once creative ideas can get stale without innovation, themselves becoming conforming in time. So, never stop your search, because half the fun is in the adventure itself. 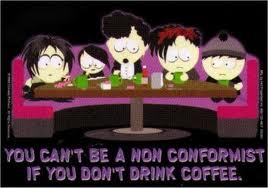 2 Responses to Rejecting rigid conformity of the mass market