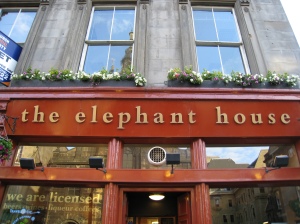 This is to be the first of a series of posts that I plan to write on “great third places.” It is an excellent and accurately descriptive term coined by Ray Oldenburg in his book, The Great Good Place. A third place is defined as:

“Third places are where people congregate other than work or home. England has pubs, France has cafés, and Austria has coffee houses. Once upon a time in the United States, common third places included country stores, post offices, barber shops, hair salons, soda shops, and taverns. Third places contribute to the life worth living. They root us; they give us an identity; they restore us; they support us. Bottom line: They allow us to be us. And everyone knows our name…”

Characteristics of third places include the following aspects:

To this urban planner, “third places” of the past two decades have been defined by coffee shops, coffee houses, cafes, expresso bars, or whatever term you want to use to describe them. Coffee shops have replaced bars, pubs, and taverns as the principal social gathering spot in many corners of the planet. When I was growing up, coffee shops were an oddity. Today, they are a vitally important and quite often identifiable landmark feature of any urban landscape.  A community  without a landmark coffee shop is the equivalent of a “decaffeinated desert of doom.”

As the sitcom Cheers reflected the bar/pub scene, no single program has exemplified coffee shops as “third places” more than the television sitcom, Friends, where the characters regularly met at a shop called Central Perk.

That is not to say that the other third places don’t remain important – pubs still have an amazing quality in the United Kingdom. Brewpubs have been growing in popularity in North America. In addition, I know of a traditional barber shop in my little segment of Greater Lansing that remains a terrific third place even as its 50 anniversary approaches later this year.

As a kid, the indoor shopping mall or the pinball arcade were the  third places to go and be seen (after school and home). Today, you are as likely to see teenagers in a coffee shop as any other age group.  One reason I believe coffee shops have supplanted bars here, is due to the minimum age of 21 for consuming alcohol in the United States.

Until recently, I had never been much of a coffee drinker. For whatever reason, I hadn’t acquired a taste for it, did not like the occasional burnt tongue aftertaste, and preferred water or before that soft drinks, instead. However, that does not mean I didn’t frequent coffee shops. I have always loved the aroma of freshly ground coffee and find coffee shops to be perfect locations for gathering with friends or just to pass time. Over the years I have observed what to do and what not to do when designing what I would consider a landmark coffee shop.

Now that I am a regular hazelnut latte (yummy) fan, I have even more thoughts and ideas on the subject. So here we go with my personal recipe for brewing up a perfect coffee shop. The ideas are presented in no particular order of preference. The list also assumes the coffee tastes good, as these other attributes are what help differentiate the oodles of coffee shops dotting the planet from being a bona-fide landmark third place or falling into also ran status:

UPDATE (2/23/12) – Here are a couple of great additions to the list suggested by readers:

UPDATE (2/25/12) – Tried Expresso Royale in East Lansing today. It is terrific and meets nearly all the criteria, including a fireplace and a ingenious way of having a outdoor seating area in winter – garage door that opens and closes depending on the weather. The double-sided fireplace provides heat to that area too. They actually serve your coffee in a glass and have great scones too!

Obviously, this list may be revised over time as I discover more great coffee shops. I hope to update it every now and then. If anyone else has additional suggested criteria for a brewing a perfect coffee shop, please feel free to pass them along. Next stop, brewpubs.