Some experts have predicted that the traditional bookstore is a dying breed of retailer given the intense competition from electronic books. For some bookstores, that may be true, as the retail landscape is littered with past icons including most recently Ann Arbor based Borders.  Those that fail to adapt or fill a unique niche will likely falter. That is why binding together all the necessary elements for creating a great third place is so important to the long-term health and viability of any bookstore and its surrounding community.

As a kid, the only choices were comparatively miniscule B. Dalton and Waldenbooks sites occupying rather uninspiring spaces in shopping malls. They had none of the third place attributes of a modern bookstore, especially when vying for third place status. These attributes include, but are not limited to:

A modern bookstore better have most of these elements or its chances of survival are rather suspect. Separately, antique, student, and used bookstores ought to incorporate at least a few of these features too, though it may not be as critical of a need as for them.

Far and away the single coolest third place bookstore I have ever been to is the Seminary Cooperative Bookstore in the Hyde Park neighborhood in Chicago. It oozes cool and hip by virtue of its matchless location – the narrow, winding, delightfully cramped cellar underneath the Chicago Theological Seminary. Don’t judge this bookstore by its cover, Seminary carries volumes on any and all topics.

In downtown Lansing, one student bookstore has  filled the niche by literally “blending” its own coffee shop as well, directly across the street from Lansing Community College’s main campus. Gibson’s Books & Beans is a classic example of a third place, as it not only caters to students at the community college, but also downtown office workers and nearby neighborhood residents. The cafe portion even serves breakfast for bleary-eyed customers.

Several other bookstores come to mind as great third places. These include: 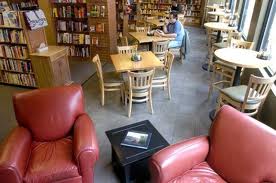 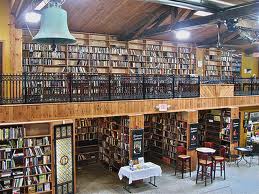 Here’s a weblink to a fascinating story about some amazing bookstore around the world.