The very best of the west – Ashland, Oregon

Okay…I am going out on a limb here. While I have not been to every city or town west of the Mississippi River, I must say Ashland, Oregon is the very best smaller city I have seen in the Western United States. That includes Moab, Utah; Astoria, Oregon; Flagstaff, Arizona; Eureka, California; Grass Valley-Nevada City, California; Vail, Colorado; Glenwood Springs, Colorado; Carmel by the Sea, California; Whitefish, Montana; Seaside, Oregon; Wallace, Idaho; Jackson Hole, Wyoming; and many others. Something about Ashland just reaches out, grabs your soul, and hugs it.

Ashland is simply amazing on all levels, from cutting-edge community planning to thoughtful historic preservation to stunning scenic beauty to bicycling options to cultural vibe to varied cuisine to just about anything else one would want from a place to live. It oozes great third places all over the city, including Standing Stone Brewery to a plethora of coffee shops, quaint parks, and small plazas. In one manner, Ashland reminds me of Edinburgh, Scotland is its stairways and passageways linking the community for easy pedestrian movement. The city’s streets were filled with people, even at sunset when most of the shops had closed for the day.

Below are two photos of the art deco Varsity Theater located in the heart of the city. Further south is a 1963 Safeway that appears as fresh and new as it did on the day it first opened. 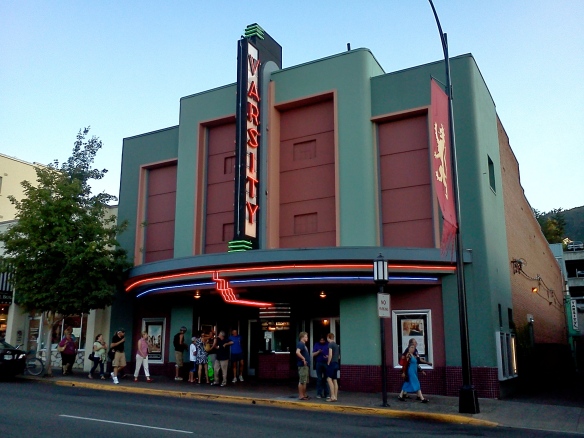 The magnificent Varsity Theater in Ashland

Side entrance to the Varsity with adjacent pedestrian stairway to a nearby parking garage.

Bike lanes, plenty of bicycle parking, the Bear Creek Greenway, and businesses who support bicycling make Ashland a cyclist’s paradise. For example, Standing Stone Brewery gives a bicycle to every employee who bike commutes at least 45 times per year – to date 35 employees have benefitted from this kindhearted and beneficial program. 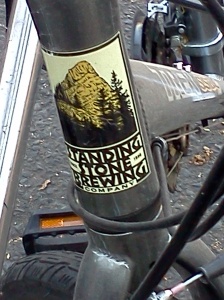 Home of Southern Oregon University and the Oregon Shakespeare Festival, this lovely city contains the eclectic charm of Ann Arbor, the stunning scenery of Asheville, and the vibrancy of Chapel Hill. Throw in its proximity to the bustling city of Medford and you have quite a thriving metropolitan area just north of the California border…and a place I might like to someday call home.

3 Responses to The very best of the west – Ashland, Oregon