Posted on September 9, 2012 by problogic

Metric absolutely lit up Motown last night with a two-hour set at the historic Fillmore Theater in Downtown Detroit. The foursome (Emily Haines, Jimmy Shaw, Joules Scott-Key, and Joshua Winstead) from Toronto was in total command of the city and did not disappoint the packed house with a blistering performance.  Toss in a great opening act, a fabulous venue, a heartfelt chat with the crowd by Emily about how much Michigan means to her and her family, and a lovely acoustic rendition of “Gimme Sympathy” at the conclusion of their encore, and you had a superior show. 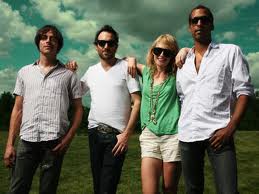 Emily Haines took control of the stage and was simply mesmerizing in her energetic presence – switching effortlessly from singing to keyboards back to handheld microphone to tambourine to electric guitar at the drop of a hat. Gotta say she has more stage persona than Steven Tyler, who I have seen perform four times – perhaps its those amazing legs of hers that had this single guy spellbound (sorry about the non-PC comment).

But it wasn’t just me, the entire audience was rocking the house – I have never seen so many people dancing, hopping, and bouncing to song after song on the main floor, in the mezzanine, or the balcony. Everyone there was appearing to have a great time.

The light show was captivating and just blew me away – much better than Radiohead’s light show at the Palace and added a unique wrinkle. – when the band left the stage, a huge countdown clock appeared. A the moment it reached zero, they were stoking up the music once again in a superb encore. Favorite songs from last night (so many):

The opening act, Half Moon Run (from Montreal) was also excellent with their bluesy rock and terrific guitar and drum work.

If you have the opportunity – go see Metric – they are absolutely electric on stage and will get the joint (as well as you) jumping.