If you happen to have grown up in Indiana or pass through the central part of the state from time to time, you have no doubt driven the U.S. 31 bypass around Kokomo. You may also recall that today, the U.S. 31 bypass is a quintessential commercial strip littered with every fast food, big box, motel, and retail chain imaginable. As a result it can be very tedious and slow going. The route completely caters to the almighty automobile.

For pedestrians and cyclists, alike, forget it. When I drove the bypass this past Sunday morning, I saw two very bewildered pedestrians standing in the grassy median trying to figure out how they were going to cross all that traffic.

Even in the years prior to becoming Indiana’s poster child of commercial sprawl, the U.S. 31 bypass was a slow motion trip in patience testing. The route was crisscrossed by a myriad of rail lines leading to the GM and Chrysler plants located at several points along the highway. It took just one train to botch up traffic big time. Hit the bypass around the shift changes at the auto plants meant certain delay and frustration. 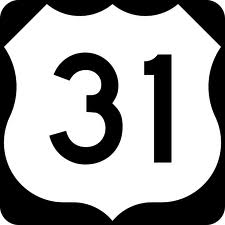 For those of us heading north on vacation, Kokomo meant one final slow headache on the path to freedom from day-to-day rush hour(s).  For some reason, South Bend never seemed at aggravating as Kokomo. Meanwhile, for those of us returning from vacation, the U.S. 31 bypass became an unpleasant reminder and reintroduction back into the rat race.

Kokomo itself, may be a very nice city. To be honest, I believe I have been in downtown just once. Unfortunately, for many of us, it is synonymous with the U.S. 31 bypass. Even though the hit song “Kokomo” by the Beach Boys had nothing to do with Kokomo, Indiana, one verse of the song was rather ironic. especially the first two lines.

Well, in the next year or so, the Kokoslowmotion will be coming to a welcome end as a new U.S. 31 expressway will open. Normally, I am one who tends to disdain our wanton disposal of historic highway corridors for new shiny new concrete ribbons – a.k.a. I-44 , I-40, and I-55 replacing U.S. 66, or I-70 replacing U.S. 40 for example.

In the case of Kokomo, I believe there is the opportunity to present a real and tangible  show case for responsible and sustainable highway development. As its nickname suggests, “The City of Firsts,” Kokomo is a place where new ideas have been tried, with many becoming successful. However, the city has largely languished at approximately the same population level as it had in the 1950s. Meanwhile, once similar sized cities like Lafayette and Bloomington have grown steadily over the decades since then.

The State of Indiana did that just recently in Carmel with the very pleasing Keystone Parkway. Keystone Parkway is an artistic gem of an expressway, in the vogue of Hutchinson River Parkway and Taconic State Parkway in New York or George Washington Parkway overlooking the Potomac River in Northern Virginia.

Some options could include:

Do I think this will happen? Honestly, no. But, if Kokomo and surrounding Howard County want to be remembered for something else than looking like Anywhereville, USA , I strongly recommend they pursue any and all avenues (bad pun) towards achieving an aesthetically pleasing, environmentally sustainable, and economically viable corridor along the new highway in that order.

The city does have some nice programs in place for its downtown area including a central business district architectural control guidelines, a downtown facade improvement loan fund, a green practice loan fund for locally owned businesses, and a riverfront district. But, given the area’s history along the existing U.S. 31 bypass, I fear that priorities will be primarily geared towards growth and economic development instead sustainable and livable placemaking along and near the new freeway corridor. And that, indeed, would be an unfortunate decision and a lost opportunity to reshape the destiny and outside image of Kokomo.

10 Responses to Saying goodbye to Kokoslowmotion