Are we there yet? – Destination retailers on “Holiday Road”

Last weekend (March 23-24) I joined  the hordes of shoppers visiting America’s newest Cabela’s store in Grand Rapids (Grandville), Michigan. Needless to say, the place was absolutely packed. This did not surprise me in the least, as the Cabela’s name can instantly bring recognition and tourism dollars to a community, as well as a good helping of economic investment to spur spin-off establishments.

Over the past couple of decades, destination retailing has grown from a few individual outposts along the Holiday Road (see music video above) like Wall Drug in Wall, South Dakota and the original Cabela’s in Sidney, Nebraska to a competitive economic development battleground across the country. Cities and states vie for destination retailers much as they do professional sports teams, airline service, tech firms, and corporate headquarters.  Today, there are Cabela’s in 25 states and three provinces (see map below), Bass Pro Shops in 31 states and two provinces. Ron Jon Surf Shops with 12 locations in four states (see photo below), and an IKEA in 37 countries. 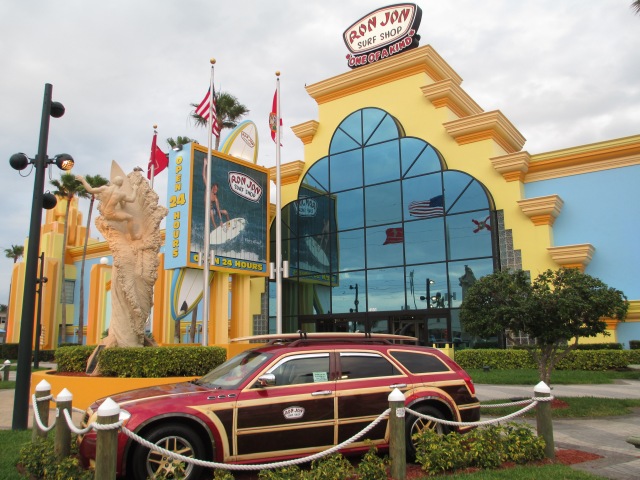 Some destination retailers are completely emblematic of their entire home community, such as Wall Drug where you cannot hardly drive 50 miles without seeing a Wall Drug billboard in the Upper Midwest and Great Plains. Upon visiting this Western icon, one quickly notices there are few other choices in this windswept Badlands town of 766 residents.

An excellent example of the economic development spin-off potential of a destination retailer can be seen in Dundee, Michigan, which is home to one of the largest Cabela’s stores anywhere. Since the store’s opening, a number of ancillary land uses have popped up around the store and the adjacent U.S. 23 & M-50 interchange. These include hotels, a water park, many restaurants, stores and shops, and gas stations/convenience stores. Given Dundee’s 2010 population of 3,957, there are many more shops and services than the town itself could possibly support on its own. Similar examples can be seen anywhere a destination retailer places its footprint.

Sooner or later, some of the more geographically dispersed destination retailers will become limited on the number of new, viable locations to choose from without adversely impacting existing stores. However, that won’t reduce their vast draw on holiday travelers, avid customers, and tourists alike, from stopping and shopping there on a regular basis.
International expansion and specialized stores in smaller markets are other options the larger destination retailers can consider. For single-site destination retailers and those with smaller geographic footprints, risks include expanding too quickly (a.k.a. Waccamaw), reductions in travel from higher fuel prices, and not keeping up with ever-changing consumer tastes or technological advancements.

As Dundee, Michigan and similar locations can attest, the arrival of a destination retailer can bring about a commercial development boomlet in the community and create stresses on infrastructure such as roads, school, and utilities. For urban planners this means getting a grasp on the development pressures as soon as possible by updating the master plan, zoning regulations, and other codes. In some cases, if growth is outpacing the ability to effectively review plans, a moratorium might be in order, where it is permitted by law.
For many travelers and tourists on the holiday road (including this blogger), destination retailers are a fun, entertaining, and enjoyable place to take a break from many miles of driving. For other holiday road warriors, they are “the vacation destination” in itself. Either way, these stores and shops can be an engine of community growth, investment, and economic development which generate a variety of employment opportunities. Provided these rapid changes are addressed in a professional and insightful manner, the destination retailer can be a positive addition to the local economy with minimal negative land use impacts.

6 Responses to Are we there yet? – Destination retailers on “Holiday Road”