Of all the streets and roads in Michigan, none quite has the familiar ring, rhyme, and historic charm of Woodward Avenue. Stretching some 27 miles from the Detroit waterfront to Pontiac, Woodward Avenue (also known as M-1) is the main street of Southeast Michigan, as it passes Campus Martius Park, Grand Circus Park, Comerica Park, the Fox and Fillmore Theaters, Henry Ford’s famous Highland Park Assembly Plant, the Detroit Zoo, and many other key sights in Detroit, Ferndale, Royal Oak, Birmingham and Pontiac. It is also the annual August host of the marvelous Woodward Dream Cruise that draws millions of vintage motor vehicle fans.

Due to its historical significance, Woodward Avenue, was the first nationally designated scenic byway in Michigan. It was also designated a Michigan Heritage Route in 1999 and an All-American Road in 2009.  To celebrate and recognize the heritage of Woodward Avenue, a variety of local, regional, and national organizations have worked together to design and install spectacular 30-foot tall tribute sculptures at intervals along the roadway. Currently four of these spectacular solar-powered, concrete and glass structures have been installed in the median at the following locations (listed south to north):

Highland Park at the former Ford Assembly Plant in 2012 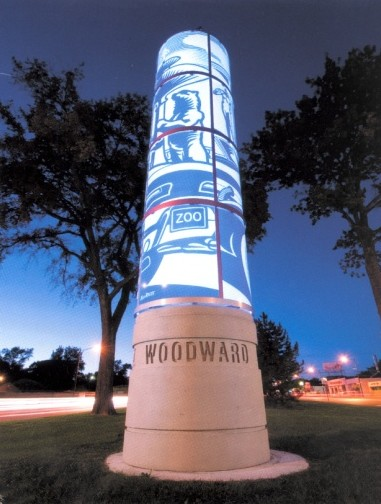 Pontiac at the south end of downtown in 2010

Over time, more tribute sculptures will added at locations along the historic Woodward Avenue route and an audio tour incorporated into the tour program. Needless to say, they are a spectacular and iconic addition to this great heritage corridor.