Atlanta’s ambitious and impressive Belt Line was fostered by a thesis project. Now, comes the Freezeway, a bold theorem by University of British Columbia graduate student Matt Gibbs, which proposes to convert some of Edmonton, Alberta’s bike trails into linear commuter/recreational ice skating tracks during the city’s lengthy winters. The system would be maintained using a Zamboni machine to smooth out the routes.

What a terrific way to adapt active transportation opportunities to the local climate and to promote winter health and fitness!  Sure, some bike trails may be unusable for cyclists during these months, but the new active transportation and recreational opportunities that are created by such a novel idea could and should sway the detractors – and I am speaking from the position of an avid bike commuter, including in the winter. And I cannot ice skate either. 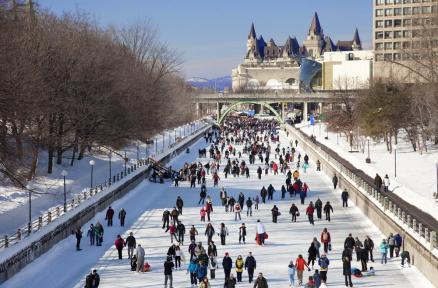 Ottawa has set the gold standard for ice skating commuters/recreation seekers by employing the frozen Rideau Canal (see above). Here is an opportunity for Edmonton to join in on the fun. This is exactly what Winter Cities should be doing – embracing the glories of winter instead of trying to mimic their warm-weather counterparts.

It is also heartening to know there are such innovative planners joining our ranks with sharp, cutting-edge ideas such as the Freezeway. These innovative planners are not simply skating by, but are carving fine grooves for the rest of us to admire. Well done!