A cultural atlas of the Beat Generation 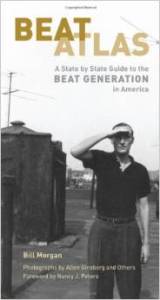 One of the most fascinating aspects of 20th Century United States cultural history was the development of the Beat Generation shortly after World War II.  While prominent for less than 20 years, the literary, musical, poetic, cultural, and philosophical icons of this generation had a profound influence on their immediate successors, ranging from The Beatles, to folk musicians like Bob Dylan, to the hippies, to the counterculture movement in general, as well as to subsequent generations.

Many societal norms, thought of as fairly commonplace today, can be traced back to gaining their first foothold in the American psyche through the Beats. Examples include environmentalism; economic, and social justice; marijuana usage; exploring aspects of human sexuality; and delving into East-Asian religions, particularly Buddhism.

So, when I stumbled across a book entitled, Beat Atlas: A State by State Guide to the Beat Generation in America, by author and archivist Bill Morgan, I was delighted and enthralled at the prospect of reading the book and learning more about how place may have played apart in the creation, growth, and influence of the Beat Generation. Upon receiving the book yesterday in the mail, I nearly read this entire fascinating and informative book in a single sitting.

The Beat Atlas is a top-notch guide to many of the personalities (both the famous and the lesser known), the places they grew up and lived, their influences, and even the libraries where one can locate more detailed archival materials on this trendsetting and influential era.  If you are even the least bit interested in American cultural history and geography, particularly from the 20th Century, I highly  recommend this book. It is also a perfect resource for those interested in cultural tourism, as the locations and addresses of iconic Beat Generation sites are provided. Well done, Mr. Morgan!

2 Responses to A cultural atlas of the Beat Generation