Tripping along the Hippie Trail 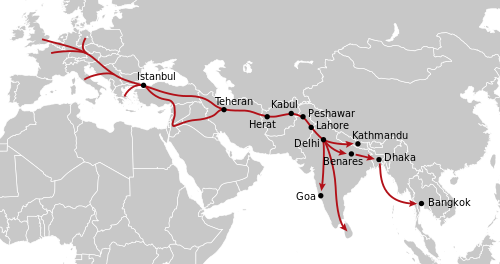 Yes folks, there is such a thing as the Hippie Trail. It is/was the overland route between Europe and South Asia in the 1960s and 1970s that lead those seeking spiritual and recreational enlightenment to places like Nepal and India. Travel along the trail, particularly by Westerners, has diminished since 1979, following the Soviet invasion of Afghanistan and the Iranian Revolution. Continued unrest in Afghanistan, Iraq, and parts of Pakistan has kept several sections of the original trail a dangerous route today.

Nevertheless, the Hippie Trail has become legendary with the publication of books like Rory MacLean’s Magic Bus: On the Hippie Trail From Istanbul to India and The Wrong Way Home by Peter Moore (I’m reading this one now), as well as the excellent book I just completed, Odyssey: Ten Years on the Hippie Trail by Ananda (Craig) Brady.  Mr. Brady’s book provided valuable insights into several nations who have been facing the perils of war for far too many decades. Afghanistan in particular, was a favorite place he visited, particularly around Kabul. 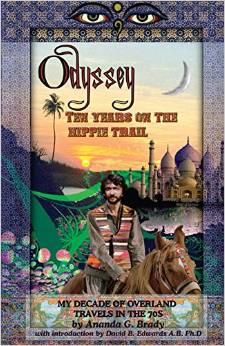 I thoroughly enjoyed his book and found it to be quite inspiring and enlightening. Mr. Craig seems to grow throughout the book, as well. His philosophical insights become more and more thought-provoking as the book proceeds. I sometimes wish that I had taken a course closer to author’s after graduating from college. That being said, his book has inspired me to seek more adventurous journeys outside the mainstream travel routes in the future. Here are a few dandy snippets from the book, Odyssey: Ten Years on the Hippie Trail. I’ve mostly included quotes from the last third of the book, though there are charming nuggets of wit and introspection throughout.