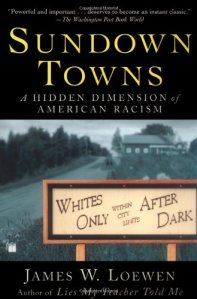 I feel ashamed to admit having grown up in the United States, garnered high school, undergrad, and graduate degrees, including a minor in history, and still didn’t know about Sundown Towns. Let me correct that, I didn’t know how prevalent they were/are.  Born and raised in Central Indiana, I knew certain communities were adverse towards minorities,particularly black   Americans. But, I had no idea how many communities across the country were outright hateful towards them and did nearly anything they could, both legal and illegal, to prevent them from residing within their limits after dark.

Perhaps I should not be so hard on myself, though. As James. W. Loewen, the author of Sundown Towns: A Hidden Dimension of American Racism so aptly stated in 2005;

These hidden fault lines have once again came to the forefront due to a rash of deadly police shootings of minorities and offensive rhetoric made during the 2016 election cycle.
–
Even as kids back in the 1970s, many of us knew that the exurb of Martinsville, located southwest of Indianapolis, was particularly hostile towards black Americans. But, it certainly was not alone.
–
What I/we didn’t realize is how widespread the bigotry extended throughout Indiana, the Midwest, and Northern and Western states, generally. In fact, there were many more Sundown Towns north of the Mason-Dixon Line than south of it. This fact is especially saddening and shocking given how many northerners gave their lives during the Civil War in the fight against slavery and for freedom of our black brothers and sisters.
–
As the book Sundown Towns illustrates in vivid detail, the bigotry extended beyond color to religion, ethnicity, and national origin, as many communities also banned, overtly or covertly, Jews, Catholics, and immigrants from Mexico, China, and Southern/Eastern Europe.  While the “Nadir,” period between 1890 and 1940 is often cited as the low point in race, religious, and ethnic relations, many aspects of racism and bigotry continued well beyond those dates, often depicted today in the treatment and attitude towards Muslims and immigrants.
–
With each page turn, I could only shake my head in disgust at the treatment of both our fellow citizens and of newcomers.

When many communities went as far as posting signs at their gateway that bluntly told certain people that they better not be found in town after dark; when a town goes to the extent of blowing a whistle every evening at 6:00 pm as a warning to get out like Villa Park, Illinois did; or when another town goes as far as having the local sheriff board arriving passenger trains to tell undesired persons to move along and not get off here as they did in Manitowoc, Wisconsin, then something is horribly wrong and deeply racist about our society and culture. It’s not like these events took place 150 years ago, these happened in the 20th Century and certain communities remain hostile, though perhaps in more subtle ways, even today.
Perhaps, that is the most troubling aspect of this powerful literary work by James W. Loewen. The fact that even though the author has pulled back the shades and exposed American racism in all its dank ugliness, racism remains a significant force to overcome well into the 21st Century. One only need read letters to the editor or social media threads on controversial and/or political topics to observe such attitudes being expressed. Simply put, racism and bigotry are strangling our society.
–
Am I saying all is lost? No, at least not yet. But, it is imperative for the United States to come to grips with its racist and bigoted past…and present. In the end, it may come down to us following in the footsteps of South Africa, by creating a Truth and Reconciliation Commission and offering formal apologies for the treatment of minorities starting with Native Americans and moving forward to all those groups subsequently treated in a biased and unfair manner.
–
I also think our educators, historians, scholars, and especially politicians need to take steps quickly and make such historical accounts more readily knowledgeable to the general public. For a person with a minor in history like myself not to have heard of the Nadir or of the term Sundown Towns prior to 2016 is simply ridiculous. Shame on me for not learning more, but also shame on our education system for not more clearly exposing these pungent aspects of American history. Not everyone in our society are heroes, so let’s start by acknowledging that fact.
–
Without such a formal, consistent, and official approach, I fear that our country will continue to sink further and further into the racism abyss, as zealots fuel their individual and collective agendas to stir the pot and create division. Left unaddressed, our union cannot possibly survive in the manner intended by its founders.
–
The forces of misinformation, post-truths, conspiracy theories, half-truths, and plausible deniability will incessantly chip away at actual truth bit-by-bit, until it is hardly recognizable. Once honest-to-goodness truth is lost, or routinely called into question, society becomes much more susceptible to manipulation and coercion.
–
That is also why it is so vitally important for each and every one of us to regularly and clearly point out these fallacies and delusions so we prevent them from being constantly repeated and potentially accepted as fact. This, my friends, must be our daily task from now until the the day when our society is better inoculated against the viral scurge of the racism and bigotry.  May it be so. Peace and namaste to all for the upcoming New Year!