When we think of city walls, some of the first images that come to mind are imposing structures erected as a protective or defensive barrier. More often than not, city walls were constructed from stone, masonry, brick, and/or concrete. Unfortunately, the best known example is probably the Berlin Wall, which was employed as a way to keep the populace of East Berlin imprisoned more than as a defensive or a protective barrier.

Thankfully, the vast majority of old city walls were not used for imprisoning their residents. Many cities, particularly those dating prior to or during the Middle Ages built defensive walls around them for protection from invading armies or bandits. Hundreds of examples remain preserved today, most often in Europe and Asia. Thankfully, a number of them have been thoughtfully preserved, along with their related gates and towers. These impressive structures provide interesting insights into those dangerous times. Another common and more recent purpose for urban walls is to protect coastal cities from damage associated with storms, storm surges, or high tides. As sea levels continue to rise, more cities around the globe are (and will be) exploring the idea of building new seawalls or heightening their existing seawalls to fend off the salty seas.

In this post, I identify two cities that have decided to transform and repurpose their protective walls into something much more than just a defense perimeter. These cities; Lucca, Italy and Vancouver, Canada, have modified their walls into impressive linear parks which enhance active and healthy lifestyles of their residents.

In Lucca, Italy, the city’s historic wall (actually the fourth such rampart) dates back to the 16th and 17th centuries. Actual construction took 105 years (1545-1650). During the early 1800s, the Duchess of Lucca, Maria Luisa of Bourbon commissioned the Royal Architect, Lorenzo Nottolini, to add vegetation, trees, walkways, and related amenities along the top of its four (4) kilometer long rampart.

Now, instead of just being an impressive fixture of the city’s past, Lucca’s historic wall is also a lovely linear park with amazing views of the city. Lucia basically established an urban greenbelt well before anyone knew what one was. So impressive is Lucca’s linear greenbelt, that Australian author Peter Moore raved about it in his charming vintage Vespa riding travelogue of Italy entitled, Vroom With a View. 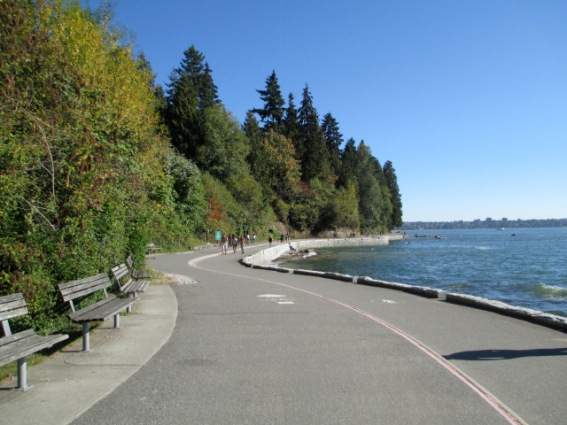 Along Vancouver’s Seawall Trail in 2014

Meanwhile, in Vancouver, Canada, the city developed a bicycling and walking trail along the top of its historic 1917 seawall. Since then, the project has extended beyond Stanley Park. This inspired idea gave the city yet another brilliant jewel in its crown of visual gems. I can personally attest to the sanguine beauty of this bike ride and the immense popularity of it among locals and visitors alike. The vistas alone are worth the ride/walk around Stanley Park.

Obviously, not all cities, particularly those in the Western Hemisphere, have old city walls just sitting around unused. However, seawalls are much more common. Even those cities with levees, essentially an earthen seawall, could consider the potential active and passive recreational opportunities afforded by utilizing such a physical structure. Fort Wayne, Indiana has done just that with portions of its Rivergreenway trail network along the St. Mary’s, St. Joseph, and Maumee Rivers.

Combining a historic city wall with the many environmental, societal, recreational, and health benefits of a linear park should be a no-brainer for many cities. It is a unique and proven method for providing a serene and scenic linear park with limited disruption to the existing fabric of the community.