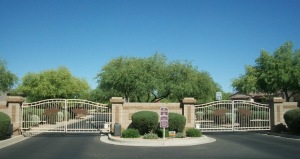 In far too many aspects of our modern lives, there is no longer “true community,” as more and more people have physically and socially walled themselves off from one another through a variety of means. Physically, these may include dead-end or cul-de-sac streets; private roads and drives; gates and fences around properties; or worst of all, fully-gated communities, where access is tightly restricted by means of coded entry or guards. Socially, folks routinely wall themselves off through memberships in private clubs, schools and organizations, narrowly held friendships, and their choices in media.

Gated communities, private memberships, and closed social media groups essentially tell others to, “stay the hell out unless invited into our private realm.” While the original intent may have been to increase personal security and privacy, such narrowness of scope largely serves to imprison those within more than wall out the rest of us. We can move about freely, while the “gated ones” are essentially honeycombed into their protective hive, only to venture out when necessary for food and sustenance.

While some may find solely coexisting with their economic and social equals to be desirable, they seem to overlook the lost benefits of a “true community.” These include:

What makes walling ourselves off from one another so dangerous, whether it be physically through gated communities, socially through our friendship choices, or digitally via our media choices, is the hive/fortress mentality that can develop as a result. Such attitudes harm both our individual psyche and society in general, as rigid “us versus them” viewpoints develop and populations break into tightly-knit splinter groups that detract from working towards mutually beneficial common good.

The silos, boxes, splinter groups, and physical gates that separate each other from a “commonist” (note – not communist) understanding only further drive destructive wedges between us. As the old saying states, “united we stand, divided we fall.” Well, in 2017, no truer phrase applies to the continuous fights between philosophies, ideologies, policies, and communities. And imprisoning ourselves within confined walls, whether they be physical or not only exacerbates the problem further.

It is time to tear down the walls that separate us from one another. One can start by being willing to listen to alternative viewpoints in the media. This can be followed by avoiding or ending memberships in those private organizations that holistically separate us from our fellow human beings. Lastly, and most difficultly will be the removal of the physical and economic barriers that separate us. Prohibiting gated communities would be a first step in the physical realm while adopting a guaranteed basic income and single-payer healthcare would take major strides forward towards this economic goal.