A Town that was Born Through a Scam!

We’ve all probably heard the urban legends of people buying swamp land in Florida from a con artist, but it’s a rare occurrence to learn of an entire town being founded on a confidence scheme…especially one that resulted in the sale of approximately 3,000 lots, and resulted eventually in an actual establishment of a town. That’s the story behind Boise City, Oklahoma; a small Panhandle town built on the treeless, prairie. But, if you were to have read the promotional literature for Boise City from around 1908, you’d probably thought you were buying a $40 slice of heaven with every lot purchased.  Even the name “Boise” (‘wooded’ in French) was misleading as the Oklahoma Panhandle is largely devoid of trees.

In 1908, the Southwestern Immigration and Development Company of Guthrie, Oklahoma, established Boise City near the center of Cimarron County in hopes it might someday become the county seat. The firm was composed of J. E. Stanley, A. J. Kline, and W. T. Douglas, who platted the town. The majority of the 3,000 lots that were sold went to out-of-state buyers who were less likely to be familiar with the area or to know about the deceptive and misleading statements in the promotional materials. Fabricated information included images of rivers, paved streets, numerous trees, many houses, multiple future railroads connections, sidewalks, and businesses. None of this was true…or even close to being true. On top of that, Southwestern Immigration and Development Company didn’t even have clear title to the land that they were platting into Boise City!

“The men were arrested in September 1909 under a federal indictment charging them with fraudulent use of the mails. The company literature, according to postal authorities, ‘grossly misrepresented the natural resources of Boise City and Cimarron County.’ It was claimed that the defendants made $75,000. They were found guilty, and Stanley and Kline were sentenced to two years in the penitentiary, and Douglas, who was critically ill with tuberculosis, was given a sentence of one year and a day. He died before going to prison.”

Nevertheless, despite all the false statements and criminal convictions surrounding its founding, the town of Boise City persisted. It did become the Cimarron County seat and a new courthouse was built there in 1928.  And, Boise City did gain rail service from the famed Atchison, Topeka, and Santa Fe Railroad in 1925. It even survived an accidental aerial bombing during a World War II training exercise without any deaths and limited damage. 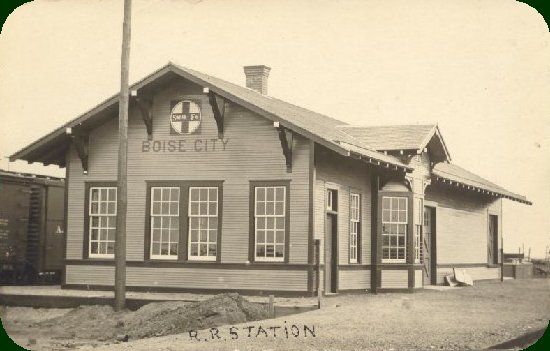 Though Boise City, Oklahoma never rose in prominence or population above 2,000 folks (the population peaked at 1,993 residents with the 1970 Census), it has remained largely steadfast throughout, even surviving the pain and difficulties of being located near the epicenter of the Dust Bowl.  Today, like so many remote small towns on the Great Plains, Boise City struggles to maintain its identity with a fragile and dropping population of little more than 1,100 citizens.

What the future holds for Boise City is unclear. It does benefit from being located at the intersection of multiple federal highways, including the primary route between Denver and Texas.  In the past, being a county seat of a rural, lightly populated, agricultural county,  would still have assured Boise City’s future more than most other similar-sized communities. Boise City has weathered both climatic and economic storms throughout its 110+ year history. But, as times, trends, and technologies change, its current status could be at odds with the never-ending shifts generated by the markets, political winds, and other macro forces. Only time will tell how the community fares, but given its past resilience, selling the town short is not recommended.