Hell’s Worth of Wickedness in One Cowtown

“As we go to press, hell is still in session in Ellsworth.”  That’s a famous newspaper headline dating from 1873 about the situation in Ellsworth, Kansas. Ellsworth may have been situated along the Smoky Hill and Santa Fe Trails, but it was a third trail that set in motion a four-year long period where hell was loose on the streets of Ellsworth. Between 1871 and 1875, the town was the principle railhead for the famous Chisholm Cattle Trail from Texas. In fact, in 1873 alone, nearly a quarter million head of cattle came through Ellsworth on their way to slaughterhouses and meat markets in Chicago and elsewhere.

As a result, when these enormous droves of cattle and their accompanying cowboys arrived in town after months on the dry and dusty plains, often, all hell broke loose as the cowhands spent their hard-earned cash on gambling, women, and libations while in town. All too often, the wild and woolly activities led to arguments, fistfights, brawls, shootouts, and untimely deaths. 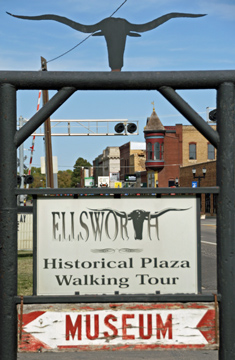 A number of famous and infamous Wild West characters wandered into and through the town during this period, including Wild Bill Hickok, George Armstrong Custer, Buffalo Bill Cody, Wyatt Earp, Libby Thompson, Happy Jack Morco, as well as Ben and Billy Thompson. Once the railhead moved further west to places like Dodge City, the town’s streets and reputation settled down. Ellsworth became a more traditional Great Plains town. Today, it is home for approximately 3,000 people.

Efforts are underway in Ellsworth to establish the  National Drovers Hall of Fame in the historic and handsome Signature Insurance Company Building (photo above). This planned venue would help depict the unique Old West history of Ellsworth to tourists from across the country and around the world. The town also holds and Annual Cowtown Days weekend celebration in August with an actual cattle drive. Now, that would be fun to see!