Shipwreck sightings in and near Michigan’s Manitou Passage 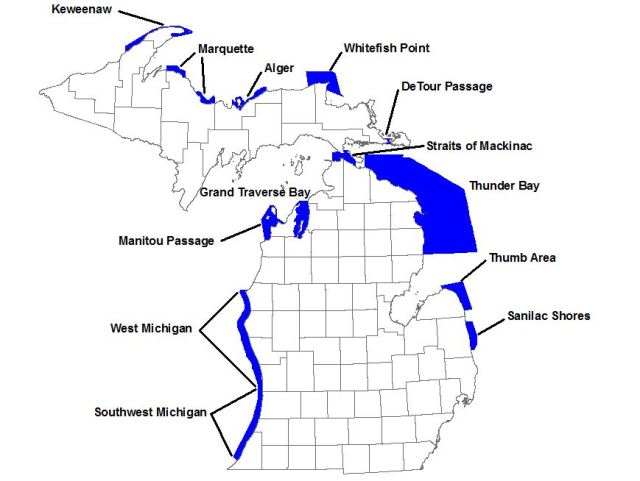 Living on the Great Lakes, particularly in the Northern Lower Peninsula of Michigan provides some unique opportunities to see shipwrecks. Literally hundreds of them rest upon the lake floor in this region, particularly in places like Manitou Passage which separates the mainland from North and South Manitou Islands. Fortunately, most of this area also lies within the boundaries of both the Manitou Passage Underwater Preserve and Sleeping Bear Dunes National Lakeshore. 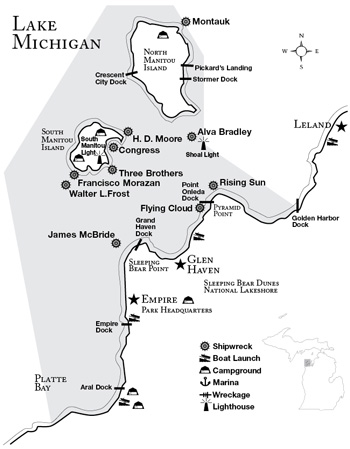 Manitou Passage (not all shipwrecks are depicted) – Source: michiganpreserves.org

While most often sighting shipwrecks requires seeing those near the shoreline from a sufficient height or the ability to scuba/snorkel, now and then you can see them when the wind, waves, and storms reveal those archaeological treasures that were either buried beneath the beaches/dunes or when portions of the wreck wash ashore.

Despite its other headaches, 2020 has been good year for seeing shipwrecks along/near the beach. We have visited three (3) of them in the past two weeks – all along the shoreline within Sleeping Bear Dunes National Lakeshore. Previous sightings have included the thoroughly impressive Francisco Morazan off the southern edge of South Manitou Island (see photo above) and the City of Boston, which is located in shallow waters and visible under the right conditions from the top of Green Point Dunes Preserve located south of Frankfort, Michigan. 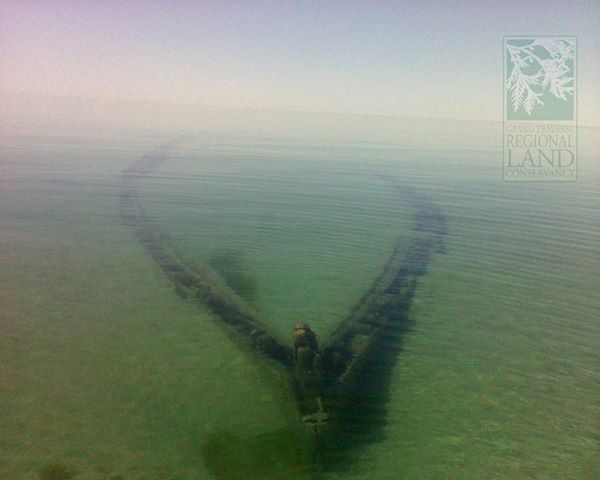 As with many worthwhile endeavors, hiking to shoreline shipwrecks is not necessarily an easy activity. For the two (2) unidentified shipwrecks located north of the Dune Climb Trail outlet (see below), we trekked 5.3 miles roundtrip (three hours of hiking) from the Maritime Museum in Glen Haven. FYI – the Dune Climb Trail may be more direct, but it is infinitely more difficult with steep and arduous sandy climbs. 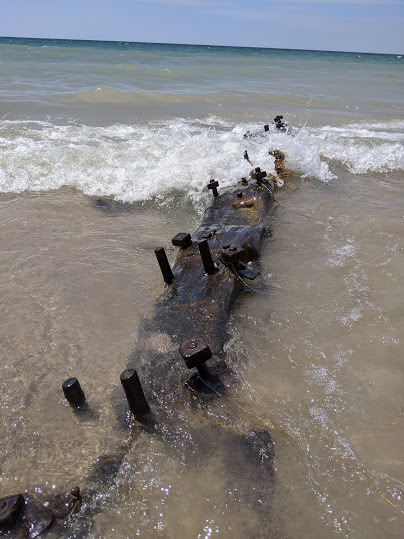 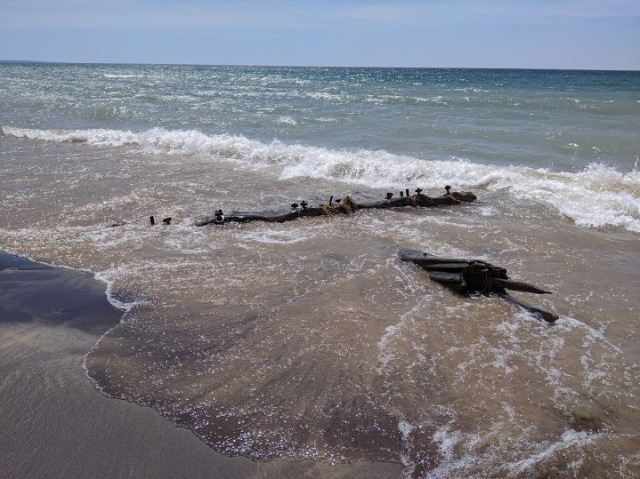 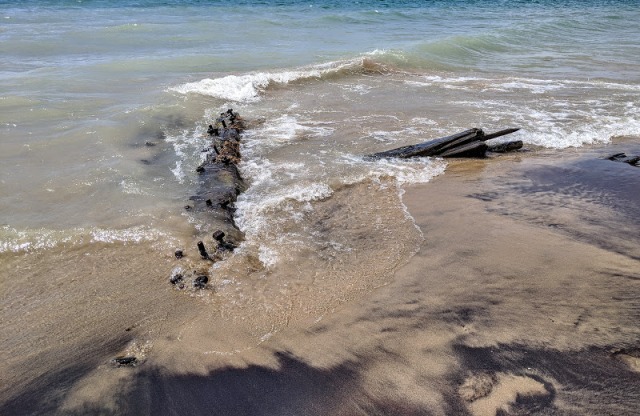 As can be seen by these two (2) photos below, not much is currently visible of the second unidentified wreck. Furthermore, it appears someone has disturbed and/or moved these remains. Not only is it illegal to disturb the remains of a shipwreck, but such actions can permanently harm the remains by exposing them to wind, sun, and rough weather that deteriorates them faster. 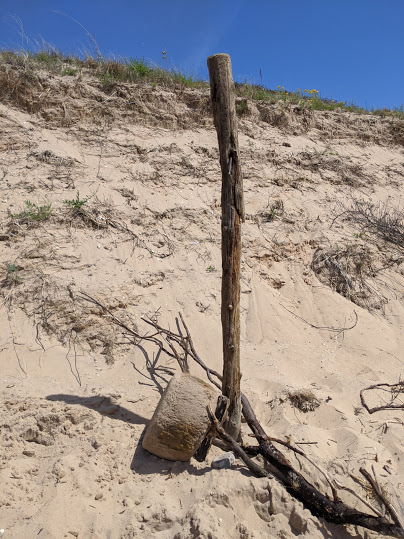 Sadly, parts of second shipwreck appear to have been disturbed. FYI – tampering with or disturbing shipwreck remains is illegal. 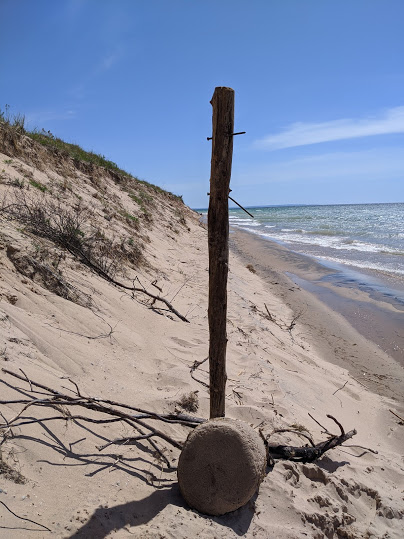 For our visit to the Jennie & Annie (see photos below), we hiked 2.8 miles roundtrip from the northern end of Empire Beach to see the wreckage at the shoreline’s edge. 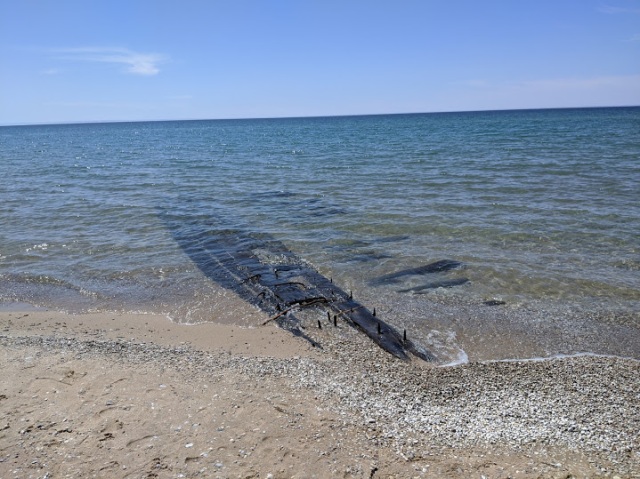 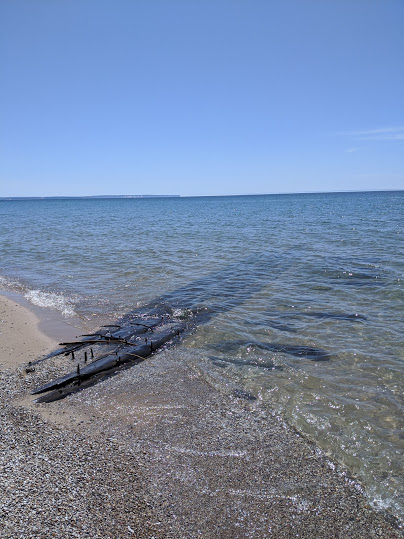 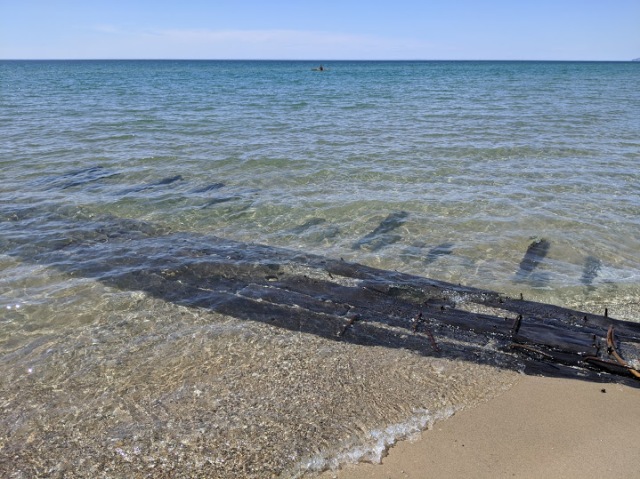 When s shipwreck’s remains are spotted, it’s a good idea to try to go and see it as soon as possible after the announcement. Otherwise, the lake may reclaim its victim and the wreck may not appear again for many years.  We visited the Jennie & Annie about a month after it was first reported to be visible, and as the photos show (above and below), much less of the wreckage can be seen in early June (above) versus a month ago in early May (below). 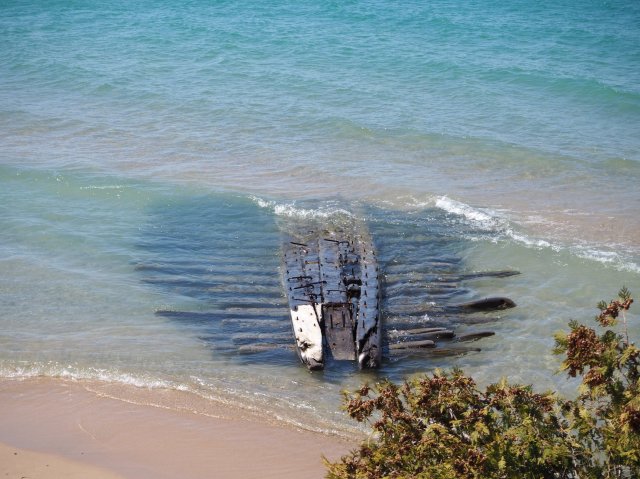 The Great Lakes hold a vast number of shipwrecks, with approximately 1,500 of them in Michigan waters alone. These archeological treasures add to the history and lore of maritime transportation on the lakes. It is all of our responsibilities to treat these relics with respect, as they are the nautical equivalent of a gravesite. As such, they MUST NOT  be tampered with or disturbed. Not only does this show the profound respect they deserve, but also helps assure the integrity of the wreck for future generations to observe.

If the topic of shipwrecks interests you, here are visual links to two (2) resources on Lake Michigan shipwrecks which are available through Amazon.com*.