This post looks at macro-scale urban planning failures to identify what this retired planner believes are/were the worst blunders that have taken place in American urban planning, as a profession. Keep in mind that urban planning includes a lot of sub-specialties, so the range of topics will extend beyond jusequatest land use planning or zoning. Please feel free to forward your thoughts on these, as well as other mistakes you feel should be included.

It is difficult to encapsulate the myriad of the harmful impacts that urban renewal had on American cities after World War II without writing an encyclopedia about the topic. Suffice it to say that this planner believes that far more cities were harmed than helped by urban renewal and that the poor, disadvantaged, and minority residents of those cities paid an enormous price for its implementation. Entire neighborhoods and districts were literally bulldozed away causing wholesale dislocation and displacement.

Beyond the obvious tragedy of needlessly displacing residents and destroying neighborhoods, urban renewal projects often “uglified” cities with drab, bland, lifeless, uninspired, brutalistic developments that sapped the life out of the surrounding community. With the soul of the neighborhood gone, is it any wonder why so many of these developments, and life within them, degraded so quickly? 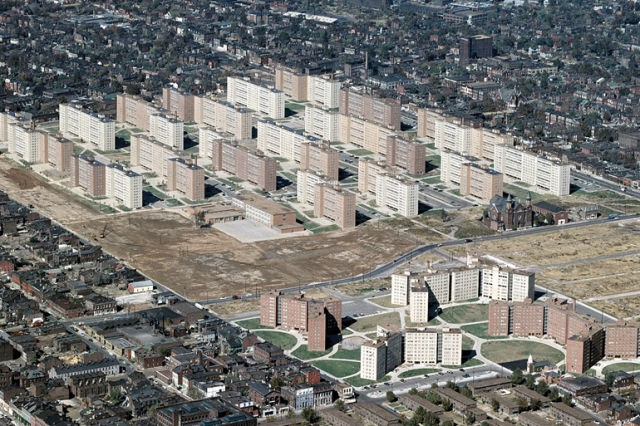 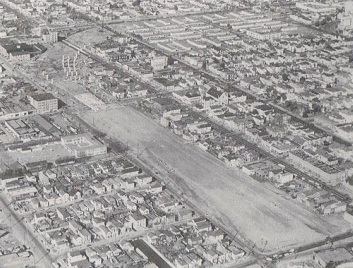 An offshoot of urban renewal, freeway construction through the heart of American cities served to sever entire neighborhoods off from the balance of the city. Most often, once again, these were neighborhoods largely comprised of the poor, disadvantaged, and minorities. Studies have shown that during the height of the post World War II freeway building boom in the United States, 475,000 households were displaced by these ribbons of concrete. That equates to nearly one percent (.9%) of all households in the entire nation in 1960! (Corrected missing decimal point on 11/23 – my apologies) And this number is a much larger component of those households comprised of diverse populations. In the ethnically diverse Overtown neighborhood in Miami alone, 10,000 households were displaced for construction of single interchange (I-95 and I-395)! (see photo below that shows the interchange under construction)

Not only did freeway construction render areas of the city virtually lifeless, but they often destroyed the economic, social, and transportation fabric of the city. The loss of thousands of homes and businesses from freeway development obliterated critical tax revenues generated by those properties, uprooted families and friends who had to move elsewhere (often outside the city limits), disconnected street networks with dead-ends and roads to nowhere, and cordoned off entire segments of the population into concrete-moat surrounded ghettos.

In Kansas City, Missouri alone, the following impacts occurred from building freeways through the heart of the city:

If there is one factor that pushes sprawl more than any other, it is single-family, low-density (or large lot) zoning. Some may argue that freeway construction or public utility (water and sewer) extensions are larger factors, but those in themselves do not promote low-density development. If the zoning was appropriate, then denser developments could be constructed along highway and utility corridors.

Single-family, low-density zoning forces each residence to occupy a larger piece of land than is truly necessary, thereby gobbling up more land in the process. To combat this sprawl inducer, communities have instituted a variety of counter-measures, including smaller lot sizes, increased density, mixed uses, mixed use zoning, accessory dwellings, etc., etc. Unfortunately, in most instances, with the exception of Minneapolis and a few other places, single-family, low-density zoning remains still remains a popular option.

One of the biggest hurdles to overcome regarding the single-family, low-density zoning classification is that it is often imprinted on so many of our brains as “the American Dream.” While in the past 15-20 years, younger generations had countered this false paradigm to some extent, by flocking back to large cities, both Covid-19 and their parental biological clocks appear to be reversing this recent trend towards density.

In addition to being a sprawl inducer, single-family zoning includes a particularly ugly side when it comes to how the poor, minorities, and the underprivileged are treated by many zoning codes. Single-family housing standards along with building codes are far too often used as a way to exclude (or literally zone out) so-called “undesirable land uses” by making the rules too restrictive for affordable housing/land uses to be built. In America, “undesirable land uses” are not just obvious things like junk yards or landfills, but are also a not so subtle way for separating out minorities, the poor, or the underprivileged through “class-based” exclusionary zoning practices. Sadly, this disparity was an oversight of the Fair Housing Act and neither the majority of subsequent court cases, nor Congressional action have yet to reverse the huge mistake. 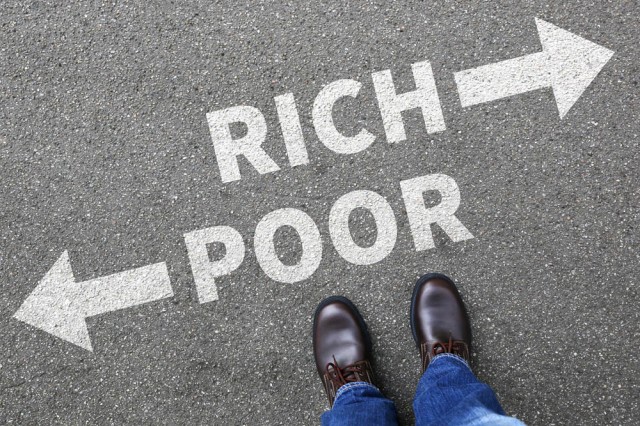 Boldly, some places have taken steps to correct the unfairness by instituting minimum affordable housing requirements for all new developments, but overall, lasting damage has been done. At the current rate, it will take decades or more to resolve exclusionary zoning practices on a project-by-project basis, instead of adopting sweeping reform of the Fair Housing Act or within state zoning laws.

The hard and fast cookie-cutter approach of Euclidean Zoning found in many ordinances tends to create a bland sameness of development in community-after-community across the country. With the exception of the local topography and perhaps local architecture, one could drive along many strip commercial corridors across America and think you were in the same place the entire time.

When we do visit some of those special places that are unique and set apart from the crowd (Santa Fe, Mackinac Island, Bisbee, or Savannah for instance) it is celebrated, but the individuality of place is rarely pursued beyond talk. Part of this may due to the reliance on tried and true ordinance language that has tested both legal challenges and time.

The planning profession’s over-reliance on drawing existing ordinance language from other cities and towns to shape their community’s own regulating documents is a long-term and on-going problem. The practice is so inherit that books are routinely published that provide planners with previously crafted examples from across the country. Is it any wonder that codes are virtually interchangeable? Fill in the blanks for the community’s name and away you go. In fact, this planner has even seen some previously adopted zoning ordinances that still contained the name of the source community within the document!

But, the failure of sameness can also be attributed to the rigidness of building codes and Euclidean-based zoning ordinances, prototypical designs being promoted by regional and national chains, overworked staff, lack of strong legal support for aesthetic considerations in some states, a lack of vision or will by elected community leaders, budget and time-conscious consulting arrangements, as well as a variety of other reasons.

To address the scourge of sameness, a number of cities and towns have developed form-based zoning codes which more precisely detail exactly what kind of community is being sought. Hopefully, as this trend grows, the personality of individual communities will become more apparent over time. One can only hope that a renewed sense of place will come sooner versus later to many parts of the country.

Here are a few literary resources on these topics that are available through Amazon.com*

4 Responses to The worst failures of American urban planning