Every now and then you learn a new tidbit about American history or a unique aspect of community planning lore. The subject of this blogpost would certainly qualify as both.

During World War I, the United States was looking to establish a location for the production of nitrate, as it is a key ingredient in ammonia gas and ammonium nitrate – an important ingredient in explosives and ammunition for the war effort. Access to existing nitrate resources in Chile had been greatly reduced by the threat of German U-Boat attacks. As a result, the Federal government decided to establish nitrate production facilities near Muscle Shoals, Alabama. 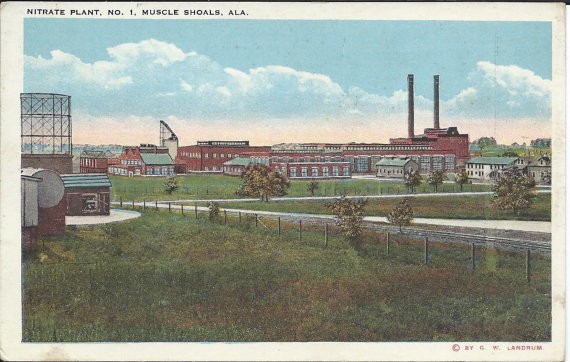 Nitrate Plant #1 was developed here utilizing Haber process for producing ammonia, which did not require large amounts of electricity. However, Nitrate Plant #2 was going to be a different story. Therefore, the Muscle Shoals location was beneficial because the Tennessee River could be dammed for producing the hydroelectricity that the second plant required. Wilson Dam, as shown below, was constructed, in part, for this purpose. Furthermore, as part of the overall project, the government needed to create housing for military officers and staff, supervisors, and workers at these facilities. 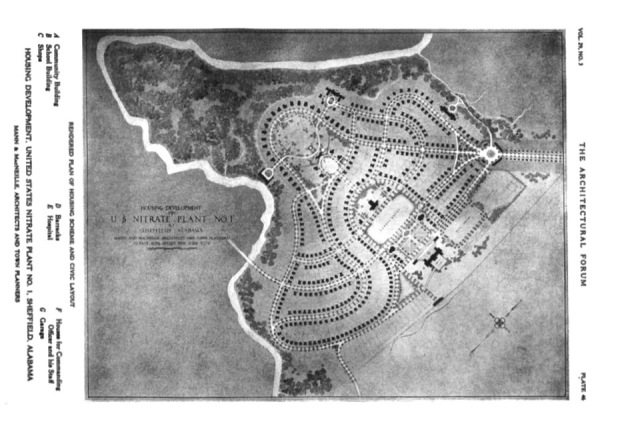 Nitrate Village #1 was designed by Mann & MacNeille Architects and Town Planners (2/15/21 gmail). It’s a community that is uniquely shaped like the Liberty Bell, incorporating the hanger, the clapper, and the bell’s outer body.  The 75-acre garden city-style community was originally designed to contain a complete village, including:

The entire community was designed with a distinctive Mission Revival Style architectural appearance.

World War I ended shortly after the nitrate plant was completed and it subsequently closed in 1919. Furthermore, work was stopped on Nitrate Village #1 before all elements of it could be finished, particularly the planned hospital, shops, hotel, and second school. Of the original plan for 400 dwellings, only 112 were completed.  After development work had stopped, most of the village sat unoccupied for nearly 15 years. 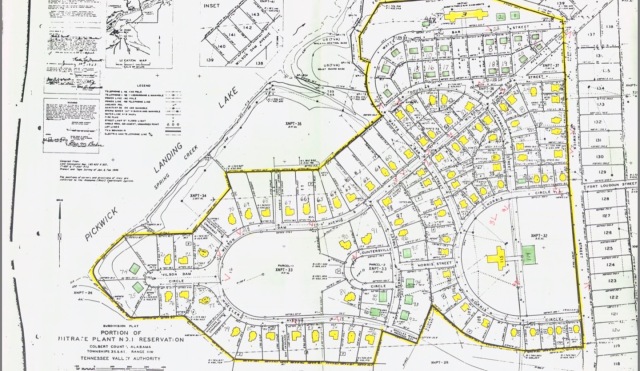 During the Great Depression, the former nitrate factory was reopened in 1933 by the Roosevelt Administration as both a fertilizer plant and development center under the oversight of the Tennessee Valley Authority. Nitrate Village #1 remained government-owned and operated until 1949, when it was turned over to the City of Sheffield. 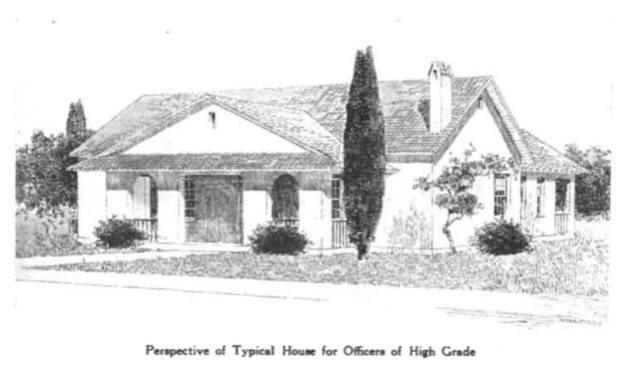 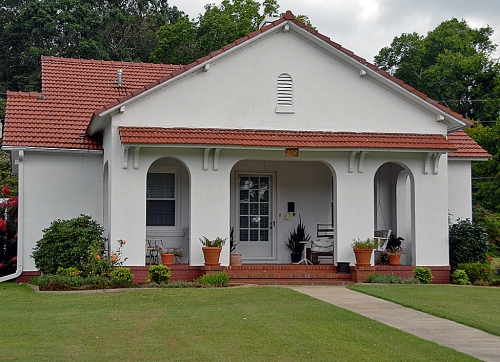 As the images above and below indicate, the homes built within Nitrate Village #1 are beautiful and have been lovingly maintained. Above is a comparison of an officer’s dwelling as planned in 1918 and as it exists currently. Meanwhile, below, is a side-by-side example of a skilled mechanic’s house as it was proposed and built a century ago and as it exists today. 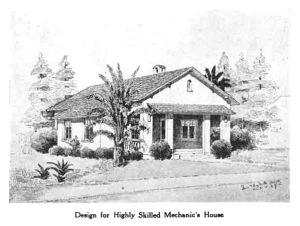 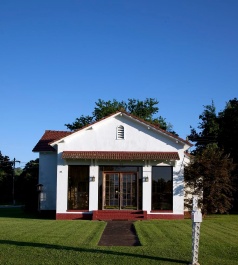 Set on a bluff overlooking the Tennessee River, Nitrate Village #1 is a wonderfully preserved example of planning and design methods of the time. The National Register nomination form notes the following:

“Community Planning – The Nitrate Village is significant as an example of an early 20th century planned community for the Federal Government. The village is an example of the emergency war developments for the government during World War I that were designed and built with rapid construction time and utilitarian quality as the foremost requirements but with concerns for harmony and variety throughout the town plan. The designers of the village, Ewing and Alien, Architects and Town Planners, utilized plaster scale models of each type of house to study group effects and to achieve the optimum design. The final design was the distinctive ‘Liberty Bell’ street plan.”

Historic view of the school and parts of the village – Source: facebook.com/pg/TheVillageSchoolFoundation/about/?ref=page_internal

In 1985, Nitrate Village #1 was rightfully added to the National Register of Historic Places. As the photos contained throughout this blogpost clearly indicate, despite its rather unflattering name, Nitrate Village #1 is a lovely century-old community. 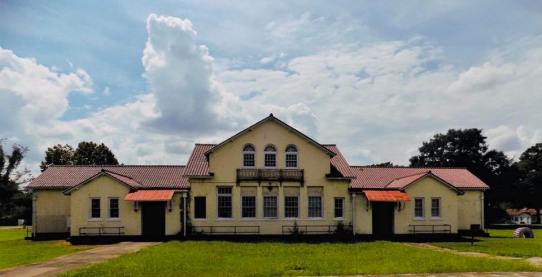 A 501(c)3 nonprofit organization, named The Village School Foundation, has been established to restore and care for the former village school building on behalf of the City of Sheffield. The school had remained in use for educational purposes until the 1990s. It, the former barracks/apartment building, the remaining houses, and the village green(s) provide a unique glimpse into our nation’s town planning heritage from the World War I era.

To this retired planner, Nitrate Village #1 is a tremendous example of thoughtful community planning and design. For this reason and many others articulated in this blogpost, Nitrate Village #1 should be duly recognized and honored by the American Planning Association as a National Planning Landmark. 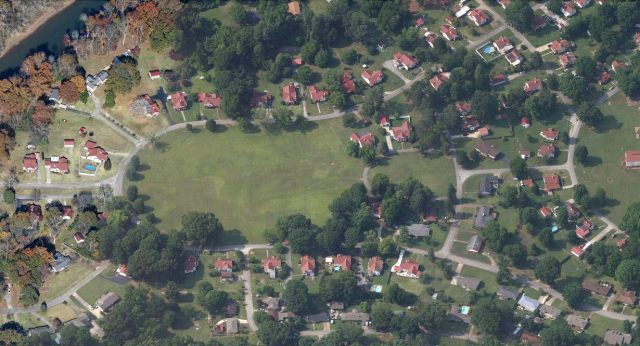 If this subject interests you, here’s a book that contains a chapter on Nitrate Village #1, which is available though Amazon.com.*