When did ending subsides for big oil start being called a tax increase?

Even dubya doesn’t get it.

A month or two ago I wrote my Congressman, Republican Mike Rogers about ending subsidies for oil and gas companies. Today, I received a response in the mail. His letter was very cordial and polite, but the logic of his argument is simply laughable.

“Like you, I am concerned with the high price of oil and gasoline, and I believe that the oil industry must be closely monitored for anti-trust violations. That said, I have serious concerns with raising taxes on any employers, especially now when Americans are struggling to pay for gasoline.” (underline emphasis added)

Are you freakin’ kidding me? Eliminating subsidies is raising taxes? Who the hell came up with that logic? Since when did eliminating a subside become a tax increase? Sir, these idiotic subsides cost all of us from $10-52 billion per year. That’s money that could be put too much better use funding renewable energy, feeding the malnourished, carrying for the poor and unemployed, or at the very least helping homeless veterans.

“In the United States, credible estimates of annual fossil fuel subsidies range from $10 billion to $52 billion annually, while even efforts to remove small portions of those subsidies have been defeated in Congress, as shown in the graphic below.  Download your own pdf copy here.” SOURCE: priceofoil.org

Meanwhile, Congressman, big oil reaps larger and larger profits at our expense. According to priceofoil.org,

” the top five oil companies alone have made almost a trillion dollars in profit in the last decade.” 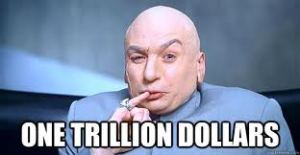 So, I have no idea where Congressman Rogers gets the idea that ending subsides amounts to a tax increase. My guess is some anal-retentive GOP think tank funded by big oil came up with that bilge of an argument. All I know is it is one of the most illogical things I have ever heard, let alone read.

5 Responses to When did ending subsides for big oil start being called a tax increase?