Vivian Jeanette Kaplan’s book (Ten Green Bottles) about her parent’s harrowing escape from Nazi-controlled Vienna, Austria to Japanese-controlled Shanghai, China is a captivating and disturbing true story of one family’s efforts to escape Nazi aggression. The book primarily covers from the mid-1930s through 1949 as her family must endure the Nazi’s in Europe, the Japanese Army occupying Shanghai, and Mao’s Communist Revolution in 1948. Needless to say, it was a tumultuous 15 years for them after many years of relative bliss as a young child in Vienna.

The author’s description through her mother’s eyes, of life in Vienna, then Shanghai, and later Toronto presents an interesting snapshot of each of these three cities – two of them during periods of great upheaval and unrest and the third as a counterbalance. Here are a few samples of the urban palate she paints for the reader:

1931: “Vienna glitters like jewels in a crown, and we take full advantage of its attractions. We meet at sidewalk cafes for Viennese coffee topped with billows of fresh sweet whipped cream and rich confections of pastries like Black Forest cake… As we grow older, we attend fancy-dress balls and parties.” (page 26)

1931: “In the springtime and throughout the fragrant summer, garden cafes are filled with explosions of newly blooming flowers and tender young leaves.” (page 27)

1934: “Our municipal programs and public works are impressive and are heralded throughout Europe as the epitome of civilized government.” (page 32)

1938: “Like a tower of playing cards that is falling apart, our world is collapsing. Day after day we experience more devastating losses of freedom, and our lives are at increased risk. In the first week after Anschluss, Jews are dismissed from their posts in theaters, community centres, and public libraries…” (page 61)

1938: “Summer in Vienna is perfumed with the scent of roses that bloom in mad profusion, aglow with the magical twinkle lights of fireflies blinking in the night.”

“In open-air concerts, violins are playing the music of our great composers, Mozart, Schubert, and Strauss.”

“There are heart-stopping rides on the enormous Viennese Ferris wheel, the Resenrad, at the Prater Amusement Park, turning into the sky and down again to the earth, and the delightful sensation of laughing out of control about nothing at all. This is the Vienna I have known since my birth, a place that has always been my personal treasure.”

November 1938: “I scuttle through the streets, which are no longer neat and orderly as they used to be. An ugly squalor has befallen the city. The veneer of civility has been lifted and suddenly I am fully aware of the metamorphosis. My beautiful Vienna has been stripped of all its finery and lies before me, its belly split open like a ravaged carcass in the sun, festering, stinking, and decaying.” (page 92) 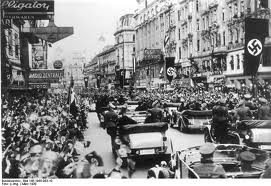 1939: “Miles out from the shoreline, we crow together at the railing of the ship’s deck, our necks craning forward, jostling one another for a better view of our new destination. Before the image is clear, our senses are already attacked by the foul odor of garbage and raw sewage.” (page 120)

1939: “We are overwhelmed by every new sight. We dissolve into the flooding humanity, a population of four and a half million that throngs in the streets, so dense with people that walking through them is like wading in living quicksand.” (pages 133-134)

1941: “The world of the Jewish refugee, or Shanghailanders as we call ourselves has been altered once more. It is evident that the Japanese government had this scheme well orchestrated. On the morning after the Pearl Harbor offensive, a parade of Japanese forces marches down the Bund.” (page 188)

1942: “Many things have changed after Pearl Harbor…The massive traffic jams have been replaced by the slower pace of pedestrians, rickshaws, and carts. Bicycles are the main means of transportation for even the wealthy.” (page 197)

1949: “There are no soldiers at the station, no trace of the military strife that we have left behind in Europe and in China. The streets are calm. Along the way we are captivated by the winter snowscape, everything coated in pristine white.” (page 282)

1949: “I am enthralled by the sights and sounds of normal life, things that I have longed for, but feared I might never see again.The simplicity of the moment is in itself an astonishment. The terror and violence we have known is replaced with sounds of unremarkable life, so real and ordinary that it is shocking.” (page 283)

In the end, Ten Green Bottles is an excellent book about one family’s efforts to survive the horrors of war, brutality, injustice, blood-thirsty atrocities, and genocide. It presents a remarkable first person, page-by-page account of the descent of society into a very sinister and scary realm.

To this reader, the descriptions in the book have disquieting parallels to the some of the fear-mongering and hatred being espoused by certain zealots and so-called pundits here in the United States. Bigotry is a very slippery slope that needs to be squelched immediately before it becomes even tacitly acceptable. For, from there the decline soon spins out of control like an avalanche of malice that is virtually irreversible.

I highly recommend Ten Green Bottles for its unique insights into family and urban life in the mid 20th century, its depiction of world history, its evocative writing, but primarily for its triumphant story of good overcoming evil.